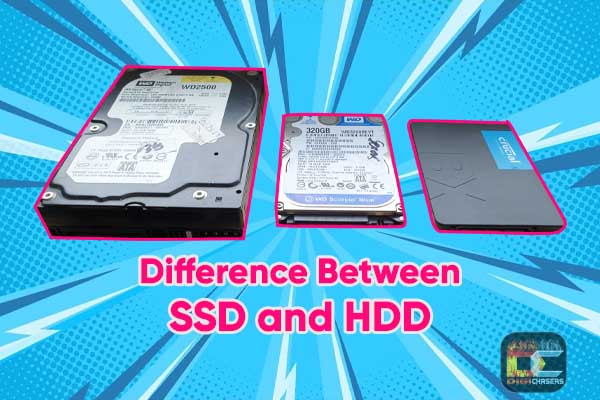 SSD shortening stands for Solid State Disk. It is a disk in which information is not written to a magnetic disk, but to several connected flash memory cards. The first SSD was tested in 1983 on a Sharp PC-5000 computer. His memory was then 128 kilobytes. In 1989, a mechanism was developed to increase the capacity of the SSD by inserting additional memory (flash) cards. In 1991, SanDisk created an unimaginable 20-megabyte drive at the time. It cost $ 1,000. This is the explanation why SSDs developed in semiconductor technology laboratories were not widely used in the 1970s – at a high cost.

HDD shortening stands for Hard Disk Drive. The first production IBM hard disk drive, 350 disk storage, shipped in 1957 as a component of the IBM 305 RAMAC system. It is a hard drive disk that consists of hard, non-magnetized disks coated with a magnetic coating, magnetic heads, other electronic equipment, and a controller that controls it, combined into a single device.

Difference Between SSD and HDD

SSD works in the same way as a USB memory stick. It has a board with electrical transformers (an electrical signal is required to “wake up” the memory), fuses and several memory chips. There is usually only one such chip in a USB memory stick, which means that its capacity is small, although a lot has now been achieved. Inside the SSD does not have any disk drive like the HDD. Everything seems much simpler. HDD technology, meanwhile, is based on a disk drive and a disk on which information is written.

SSD does not have moving parts inside not like HDD with can make a lot of noises.

SSD are more compact. This means it is small and thin enough. This means that such a drive will be inserted into ultra-thin laptops or tablets, and maybe even smartphones.

The biggest drawback of an SSD is the price, although at the moment this is no longer as big of a problem as it was 10 years ago.

The main advantage with HDD is the price per GB and it is much easier to find a big capacity hard drives.

As we already know, HDD is a lot slower than SSD, and its performance degrades over time. Hard drives are also marginally heavier and make a lot of noise.

How to Choose Between SSD and HDD

The choice should not be difficult, SSD technology is almost everywhere beats HDD technology. While there are situations where HDD is still a smart choice. HDD is worth choosing when storing very large files that do not require high speed and are not used very often (photo storage, some types of servers).

This is how the failed HDD looks from the inside.

That’s why you should choose SSD disk of course if you can afford it.

We hope you like this article, and if you have additional questions you can always leave a comment or write to us in person.