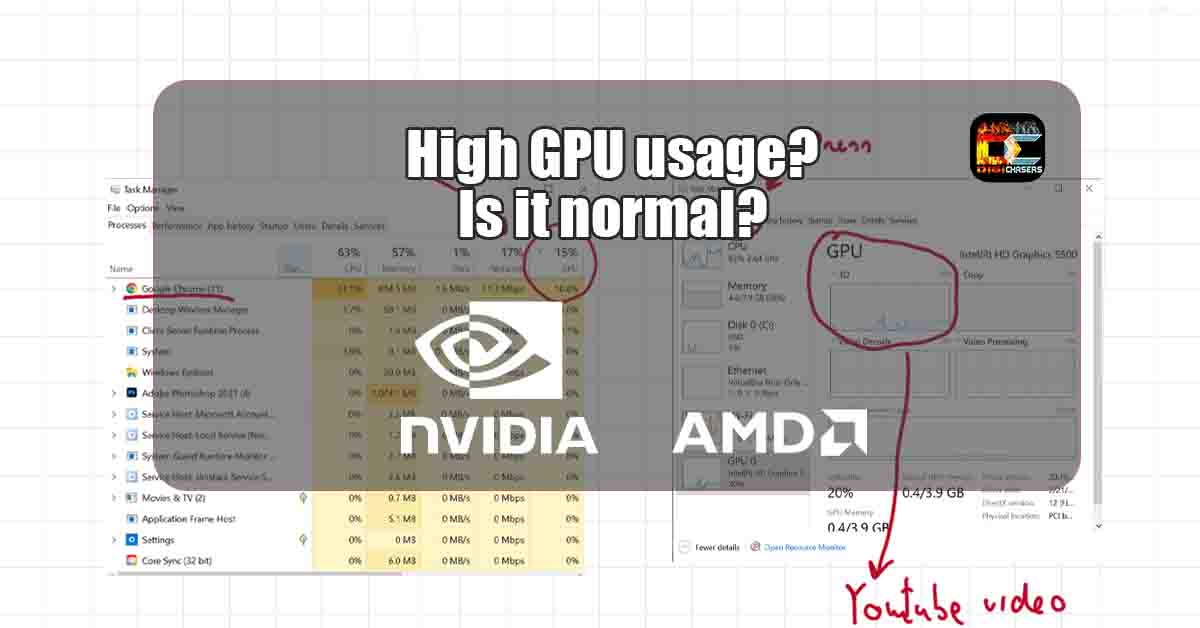 High GPU usage means that the GPU is in use. High GPU usage is good if it occurs while playing games or using GPU resources needed applications. So the higher the GPU usage, the more the graphics card is used. The GPU is mostly used to play powerful games with high graphics or video rendering. What if you notice high GPU usage at idle?

If you notice extensive GPU usage at idle, that means some programs use GPU in the background. The easiest and fastest way to check GPU usage is to enable Task Manager (CTRL + ALT + DELETE).

In my case, the music clip was just turned on over youtube, which is why the GPU was in use. In this case, try disabling the applications affecting the GPU usage and see if it goes down.

But if the source cannot be determined and it is not clear why your GPU is in heavy usage, it may be due to the GPU software.

Below are some solutions that can help significantly reduce GPU usage while not gaming.

If you have an AMD video card, you can try changing some AMD Radeon control panel settings.

Make sure you press on General in control panel menu.

You can reduce background GPU usage by following the steps above.

To reduce GPU usage on background on Nvidia GPU, you need to go to the NVIDIA GeForce Experience menu. Below is a guide on how to reduce GPU Usage.

We hope this has helped you reduce your GPU usage. Keep in mind that while playing, it is normal for the GPU usage to be close to 100% per cent. So if 20 to 80 per cent of your GPU is used to play, it means that you’re playing a game that doesn’t require a lot of resources or time to increase graphics settings.

If you have not found an answer feel free to write in the comments, and then we will try to help you as soon as possible.

As we mentioned earlier, if there is a reason for high GPU usage, it is not bad. If high GPU usage is unclear due to dormancy, you can perform a GPU software configuration.

OBS is open-source software for video recording and live streaming. That means that it uses a lot of GPU resources, thats why if you want to make streams, you will need a powerful GPU that is more powerful than your played game.

Why is my GPU usage so high?

That means that the GPU is working on something if you don’t know why you can always check the task manager.

It depends on the GPU. You can google your GPU specification and determine what power consumption is specified.

Why is my integrated GPU usage so high when i force an app to use dedicated?

This means that you have not successfully switched the GPU to the dedicated one. Try rewriting your existing GPU drivers first.

Why is my GPU usage so high when playing games?

It is a normal phenomenon. If the GPU has work, GPU has to do it.

GPU usage does not depend on the version of windows. Unless your GPU drivers are unsuitable for Win10, all sorts of anomalies can occur.