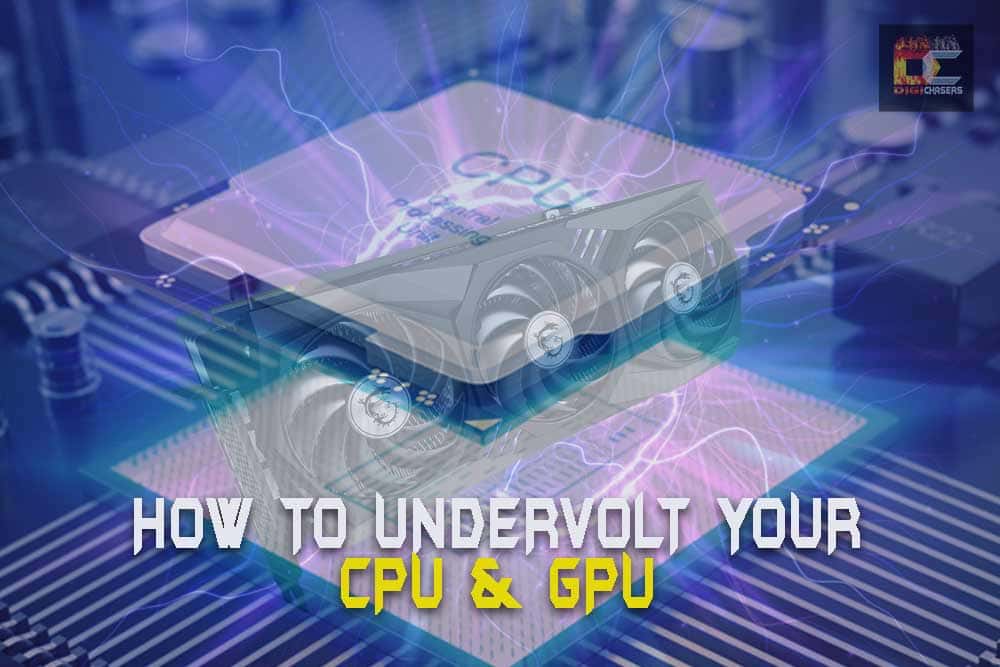 If you use your computer more than just Facebook or Twitter, then at some moment you are definitely facing a hot computer problem. Especially during heavy tasks such as high end gaming, video rendering, or some other multitasking. Also, the system becomes overheated due to poor ventilation. You must be familiar with the term overclocking, which means increasing the clock speed of a component above the built-in specifications to increase performance levels. So how do you undervolt your CPU and GPU?

In this detailed guide, we will discuss the terminologies behind undervolting and underclocking. Moreover, complete methods on how you can undervolt/underclock a CPU as well as GPU will be discussed.

Also, reader will be made aware of the pros and cons of undervolting and underclocking.

What is overclocking a CPU?

Before we go towards the real topic, one must understand its relevant terms. If you are a high end PC user, then you must be aware of the term overclocking. Overclocking, as the name suggests, is increasing the clock performance levels, much greater than the manufacturer specifications. In this way, you will get an increased performance level.

Overclocking will give you a real boost in performance, however, you will have an increased power consumption. This will lead into heating up the system as well as drastically decreasing the battery performance.

What is Undervolting CPU and GPU?

Undervolting is decreasing the operating voltage of a CPU or GPU. As explained above, sometimes overclocking will make your life miserable by drastically reducing battery life and increasing temperature of the system. In such cases, you need to undervolt your CPU or GPU.

Also, most of the high end cards, especially the ones designed for gaming, are overclocked by the manufacturers. Again, this is done to give some extreme performance. However, most of the times we don’t need those higher and extra voltages for our system, as these are unnecessary.

In the case of a PC, undervolting helps a lot in regulating these voltages and keeping the temperatures within limits. For laptops, it is of much more importance as it improves battery life and increase its health as well.

Undervolting and underclocking are much safer compared to overclocking. The reason is you are not increasing the performance level beyond the OEM limits. However, one must do it the right way and take necessary caution in performing each step.

This is not only safe but truly speaking is beneficial for CPU and GPU. It increases the overall life of both CPU and GPU by operating them at lower temperatures.

Recommended to Read: Most Powerful Laptops You Must OWN

Should you undervolt your CPU and GPU?

This question greatly depends on your usage as well as the system. If you have a laptop or a small form factor PC case, then this is the best operation to carry out. It will keep your system at lower temperatures and thus improve the overall health of the system.

Undervolting helps a lot in avoiding CPU throttling. Thus if you are a gamer, it will keep your gaming laptop for a long time. However, it will not increase the overall gaming performance.

Undervolting is much better as compared to underclocking. The reason is, Undervolting reduce the temperature levels only, whereas, underclocking decrease the overall performance of a CPU and GPU.

Sometimes, you will face an issue, where you have to carry out both of these options together. However, if your system allows, it is always recommended to Undervolt only. Thus, you will save energy and power without decreasing performance of a system.

How to undervolt your CPU?

There are number of methods to undervolt your CPU. Every method has its own benefits as well as complexity. However, the best and easy methods are using Throttlestop software or Intel-Based CPU Undervolting usingIntel’s Extreme Tuning Utility (XTU).

The step by step method of Undervolting CPU using Throttlestop software is given below:

Recommended to Read: Recommended Laptops for Freelancers and Programmers

To keep Throttlestop running in the background you need to proceed as follows:

Launch Throttlestop on Start up

In order to launch Throttlestop app on start-up, you may follow the given steps:

And voila! You have successfully completely configured your system for Undervolting CPU.

This is another great method for Undervolting the Intel Based CPU. Its steps are given as:

How to undervolt your GPU?

In order to undervolt your GPU (Nvidia), you may use the following applications:

In case you need a complete step by step guide for undervolting any of the GPUs, you may watch this video.

How to Undervolt laptop?

Undervolting a laptop’s CPU and GPU is similar to normal Undervolting. Here, in laptop you will get additional benefit of improved overall battery health and performance. All steps as explained above, may be implemented in a similar manner on laptop as well.

As mentioned earlier, you may go for undervolting a laptop using the similar steps. However, one must follow the necessary caution and never undervolt or underclock beyond the limits. Therefore, the answer is Yes, it is safe as well as beneficial. But one must always proceed with due caution and care.

Pros of Undervolting your CPU

Undervolting is quite beneficial especially in terms of laptop. Some pros of undervolting for a system are:

Cons of Undervolting your CPU

Some cons of undervolting (not so significant) are:

Finally concluding, we have discussed the complete guide regarding undervolting and underclocking. Undervolting helps a lot in keeping the system’s performance balanced. Not only it increases the overall lifespan of the components but also improve the battery life of a laptop. Moreover, it reduces the heat and noise of a system by decreasing the overall temperatures as well.

So, tell us in comments your practical experience with undervolting/ underclocking your CPU and GPU.