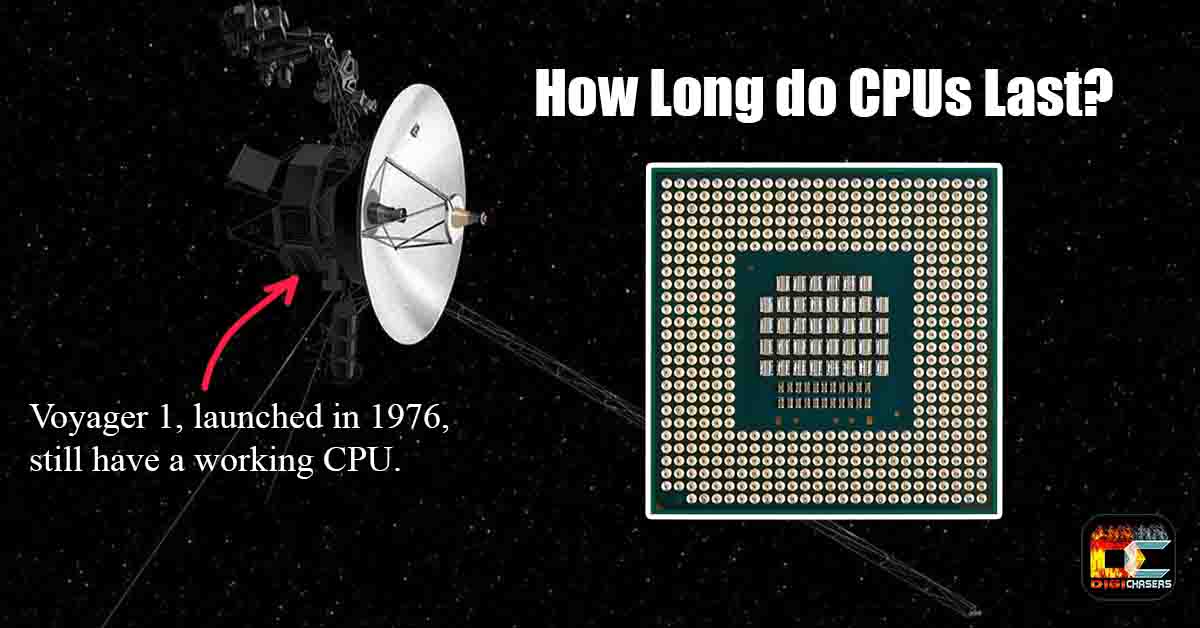 Many of us probably wonder what the life span of a CPU is and what affects the CPU life span. A computer CPU is one of the most reliable components of a computer. Therefore, if your computer does not experience any freak occurrences like storm damage or something like that, it should last more than 10 years. Such a period is sufficient for service life, as the technology of this age will be obsolete.

An example of CPUs durability

1976 NASA Launches Space – Voyager 1 and 2. Mentioned Spacecraft has a CPU of 18bit design with 64 instructions. More than 45 years have passed since Voyagers were in space. This is a living example of how long CPUs can last.

How Long do CPUs last for Gaming

A common cause of computer components failure is high temperatures. And when playing influential games, the computer will inevitably get hotter than staying idle.

An example of components failure via high temperatures

If you are a geek gamer, you probably avoid the video card (GPU) used for crypt currency mining. People avoid such GPUs because they have been working at full load for a long time, at high temperatures, so it is not clear how much the thermal paste has dried in the GPU inside and so on.

The same principles apply to CPUs. If the thermal paste has not been changed and has been constantly played at high temperatures, then the CPUs life resource will be reduced, especially if the CPU will be overlocked.

But that doesn’t mean you don’t have to play games or overlock the CPU because other components like the motherboard, GPU, RAM, or PSU are likely to fail until the overlocked CPU fails (of course, if it has been overlocked wisely).

How long do Overclocked CPUs last?

If you do not increase the voltage too much, the overlocked CPU lifetime will not suffer much. However, increased voltage increases the frequency but at the same time increases the CPU temperature, which is the most significant factor in the long life span.

If you overlock the CPU, keep in mind that you need a 3rd party cooler to cool the overlocked CPU more efficiently.

If the overlock is done wisely and a sufficiently robust cooler is used, then the CPU lifetime is unlikely to be significantly shortened.

The rule of thumb is that you need to avoid temperatures above 80 ° C (176 degrees Fahrenheit).

How long do AMD CPUs last?

AMD provides a 3-year warranty on its boxed processors. AMD has been trying for years to prove to consumers that they are equal competitors to the Intel CPU. And lately, they’re doing great, producing new CPUs often outperforming Intel processors.

This is good for gamers like you and me, as Intel is losing its monopoly, making it harder to dictate prices in the CPU world.

How long do Intel CPUs last?

Intel gives 3 years of warranty on almost all of its boxed CPUs. Maybe it’s not much, but knowing that about 99 percent of processors ideally serve about 10 years or more, it sounds not so bad.

Intel processors have long been a significant player in the CPU market. This is because they have always been known for the reliability and robust CPU even though the price was significantly higher than the competitor.

There have never been calculations that which CPU lasts longer, AMD or INTEL. But for a long time in the shadows, AMD, in 2021, surpassed Intel for the first time in 15 years.

This means AMD has something to offer the market to consumers. And consumers are happy with the quality and durability of the AMD CPU and other products.

A computer CPU is one of the most reliable components, and it should last more than 10 years. So don’t worry too much about CPU lifespan unless you do monstrous overlocks.

If you still have a question about the CPU’s durability and lifespan, you can leave it in the comments section.