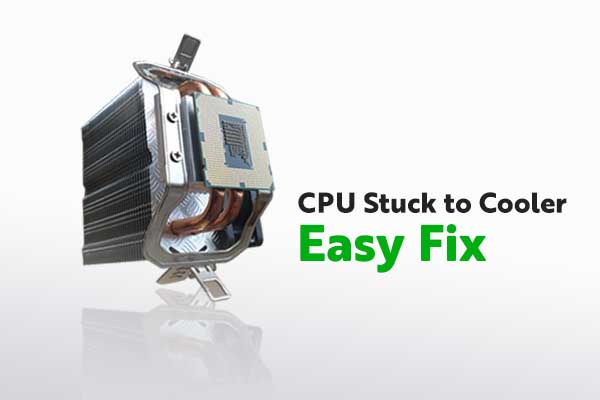 Are you trying to change the processor (CPU) and found out it is stuck to cooler? If it happens – don’t get scared, it’s not a complicated problem, it can be solved by various simple methods.

Why does CPU stick to a Cooler?

There are various opinions, however, some nerds claim that this is a salutary effect of poor thermal paste. It is known that after a long service life, thermal paste can harden and even become harder at low air temperatures.

How to safely remove CPU from a Heat sink?

First of all, when changing the CPU, the computer should be recently switched off. In this case, the CPU and a heat sink will be warm or even hot, which will make it easier to distinguish one from another.

Try gently grasping your fingers on the CPU and moving the sides slightly;- try twisting instead of a straight pull. If it starts to move then there is not much left until the goal. If it doesn’t move, then another method can be tried.

Straight pull can cause CPU damage, when CPU separates from IHS (the top of CPU where the thermal paste is placed).

A fishing line or a strong but a thin thread is a great tool to remove CPU from a cooler. Just plug the thread around the corner of the processor and in a slow slicing motion move it from one edge to another.

If you have a heat gun or hair dryer, it can also make it easier to remove the CPU. Direct the flow of hot air to the space between the processor and a heat sink for 30 to 60 seconds. This should soften the thermal paste; after this procedure removing CPU from a cooler will become much easier.

What not to use when removing CPU

Not all sharp objects are suitable for such a procedure. The usage of a knife or a screwdriver can damage the surface of the CPU.

If you have any questions feel free to leave them in the comments section below. We hope that this article was helpful to you.