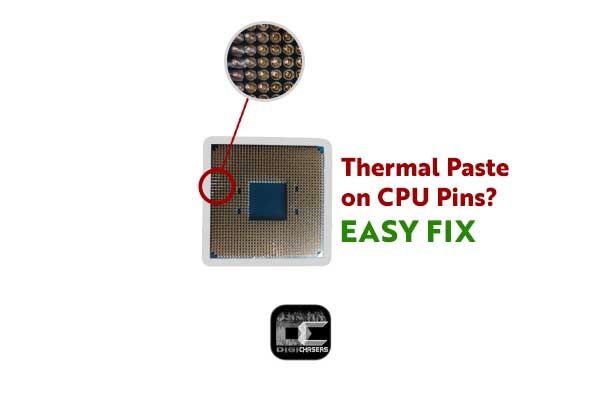 You don’t need to be a professional electronic engineer to change Personal computer (PC) central processing unit (CPU) or renew thermal paste. Each of us wants to save time and a few bucks, so sometimes we do the repair work by ourselves.

Even the best can sometimes have an unforeseen problem. Therefore, if thermal paste gets on the CPU pins, it can be easily cleaned. Most importantly is to have steady hands and some cleaners.

Let me walk you through the simple steps of removing thermal paste from the CPU.

Please be aware that this is entirely at your own risk. We take no responsibility if anything happens to your CPU during the removal of the CPU thermal paste. We have succeeded, but it could happen otherwise.

How to Remove Thermal Paste from CPU Pins

Isopropyl Alcohol (common ingredient in chemicals such as antiseptics, disinfectants, and detergents), toothpicks and toothbrushes are the main tools to remove unnecessary thermal paste from the CPU pins. Be extremely careful not to bend the CPU pins during the following steps.

Next time you try to remove the CPU from its socket, make sure to use gloves and clean the top of your CPU, this way you will avoid a similar situation in future.

CRC QD Electronics Cleaner or another cleaner for cleaning electronic parts (chips, etc.) is perfect. Such chemicals evaporate quickly in the air, but you should still wait a few minutes before installing the CPU in the socket.

Do not use WD-40 or any other similar spray intended to lubricate the equipment, as they may leave a layer of grease on the CPU pins.

If the thermal paste got on the Intel processor, then it will not be difficult to remove it. AMD processors have long pins that fit into the motherboard’s CPU socket, so it can be a little more difficult. The removal of excess thermal paste also depends on the amount of thermal paste.

Have long pins on CPU, and on motherboard CPU socket, there are holes for those pins. Of thermal pasta goes in to little holes, then it can be difficult to clean it.

Don’t use Q tips, because they leave remnants of the material, which can later cause serious inconvenience.

If you have more questions feel free to ask them in the comments section. We hope that this article was helpful to you.