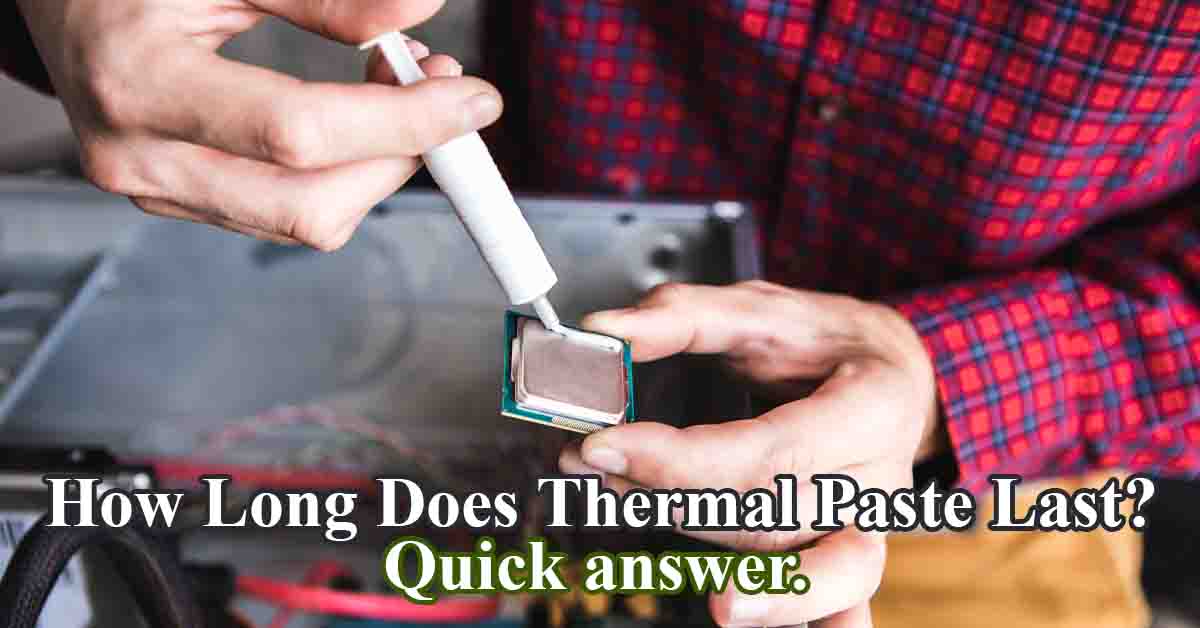 Thermal paste is a very important component in every PC build. Without it, you can burn your PC very fast. But how long does thermal grease last? Several things determine the service life of a thermal paste. First, there is a difference between thermal paste shelf life and thermal paste service time. Normally a good quality thermal paste starts to lose its properties from 4 years of use while it has a shelf life of 8 years sealed and 4 years opened.

Every thermal paste is a suspension of heterogeneous compounds held together with a liquid. And because of that liquid, there is a date of expiry. So if the thermal grease becomes hard or powdery, we would suggest not using it, as it has probably lost its properties.

How long does thermal paste last on CPU?

There is no exact answer. Because we all use computers for different things and in different weather conditions. Keep in mind that thermal grease can also be of different qualities. For example, a good quality thermal joint compound can work without change for 4 years or more and occurs when the bad quality thermal paste loses its properties after 2 years.

Rule of thumb: There is no exact answer. If you have a PC build, which was built 2 years ago, you might want to replace the thermal paste. If the procedures are performed properly, the temperature of the CPU or GPU should decrease.

You have noticed that your computer’s CPU has started to heat up, and the temperature is keeping close to 176 degrees F (80 degrees C) on idle. It most likely means that the thermal grease has hardened and lost its properties.

Of course, such temperature changes can also occur due to the dusty CPU cooler. Occurs when the CPU detaches from the motherboard with the heat sink. Therefore, it is always beneficial to open a side PC case and inspect the situation.

For example, the ARCTIC MX-4 declares that its thermal compound lasts 8 years. Yes, it is one of the best thermal grease on the market, but we suggest not to wait so long until the next thermal paste change.

How long does thermal paste last in the tube?

thermal grease can sit 10-15 years sealed / unopened and still can be used without problem. Just before use, you should pay attention to a few things:

When the thermal compound is unfit for use:

If the thermal compound has been separated at all (there’s a watery substance that comes out, along with the usual gray paste) or, if I remember right, it has a strange smell, then it is probably best to invest in some new thermal compound.

When to throw out a thermal compound:

Rule of thumb: If you have a thermal paste older than three years, always check for consistency and smell.

Actually, we have never heard that a thermal compound becomes obsolete after long storage.

How long does thermal paste last once opened?

When the compound was used, it got swallowed with air, after which various chemical reactions could begin to take place.

If the storage area of the thermal grease is hot and dry, the faster it becomes obsolete and dries out and becomes unusable.

Most manufacturers declare that it is good to use thermal paste four years since its first opening.

As we mentioned before, it is safe to use a thermal grease that is more than four years old. If you don’t know for how long you have had it, but its condition seems unchanged, you can continue to enjoy it.

Below you can see the frequently asked questions; if you have a different question, you can leave it in the comments section.

What happens if you don’t use thermal grease?

How to apply thermal paste?

There are many different ways in which thermal grease can be placed. However, we prefer the cross X technique.

You can look at this video below on using the cross x technique.

How to clean thermal paste off CPU?

What is Types of Thermal paste?

This thermal paste is designed for more hardcore gamers and is mostly used in overlocked PCs. Using this thermal grease can reduce the CPU temperature by several degrees. But it also has downsides:

In our opinion, this is the best and most practical thermal joint compound on the market. It has excellent performance and is not conductive like liquid metal thermal grease.

As Arctic brand declares, it has eight years of life span when applied. It’s more than enough because you’ll probably need a CPU upgrade after eight years.