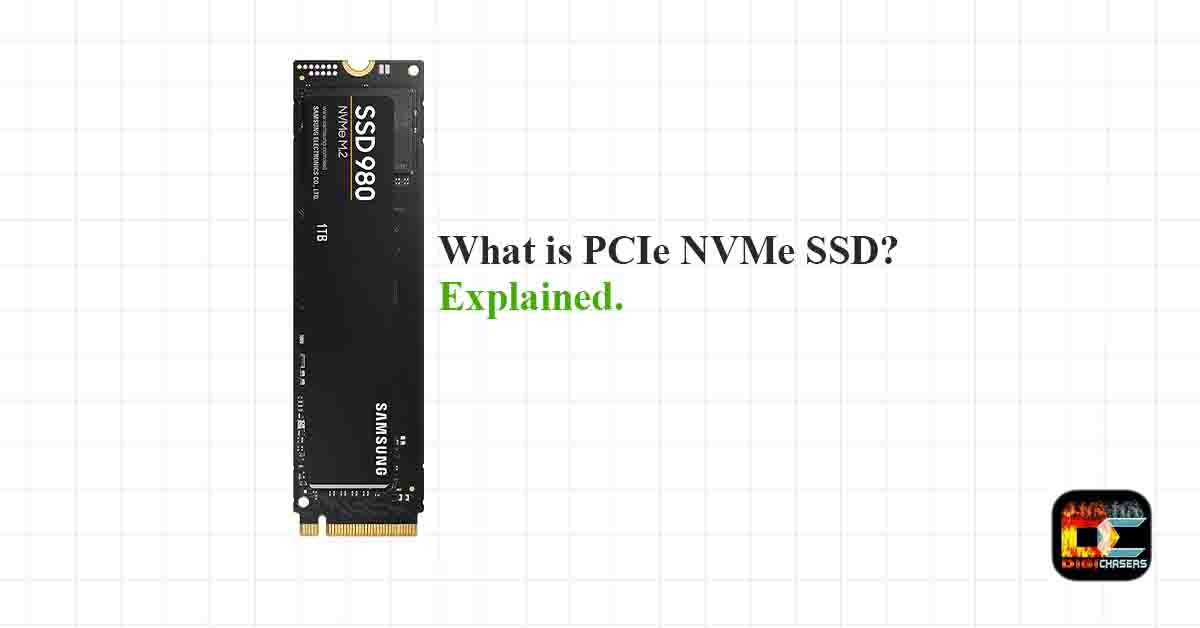 In PC tech world, there are a lot of different terms like NVMe, SSD, RAM, CPU, PSU etc. So if you are here, you probably are wondering what is PCIe NVMe SSD? Where PCIe NVMe SSD is connected? And why it is better than regular SSD? Today, we will try to help you get your answers and to choose the best NVMe SSD for your computer.

What is NVMe PCIe SSD?

NVMe PCIe SSD is a storage disk, which is connected to m.2 slot which have PCIe x4 lanes. NVMe is an interface standard for SSD communication over PCIe slot. PCIe’s lust have a maximum speed of 32 Gbps which is more than five times faster than a SATA 3 SSD (6 Gbps). These days in PC you can find storage devices which can be – HDD, SSD, M.2 SSD, NVMe SSD.

NVMe is a type of protocol which communicates via PCIe slot.

NVMe’s type of at this moment is the fastest memory type on the market, it is much faster than HDD or regular SATA SSD. The price of NVMe is also significantly higher compared to HDD, SSD or even SATA m.2 SSD. But if the financial situation allows, you should always choose NVMe type storage memory over other storage disks.

Why you need to know difference between these two? Because they both look almost the same, just one of them have two holes in connector and other one hole. And yes, they both in most cases can be connected to m.2 slot.

As you can see, there is a big difference in writing speed. NVMe type SSD is a lot faster.

Where to install m.2 SSD on Motherboard?

At first, it looks tricky, because a lot of folks does not know how to connect PCIe SSD to Motherboard. If you have a newer motherboard, just search for m.2 slot, which will look like this.

If you have an older PC which doesn’t have an m.2 slot, then you will need an PCIe NVMe m.2 adapter. You just need to buy an adapter and put in right the PCIe slot.

Just buy a right adapter, because there is large selection of different adapters. Some are connected to different PCIe slots.

First step, inspect your motherboard and look what slot you have. PCIe NVMe m.2 adapter can be suitable for different PCIe slot. The easiest way is to buy a universal adapter that will fit in a variety of PCIe slots.

For example, this NVMe adapter Sabrent NVMe M.2 SSD to PCIe will fit PCIe x16, x8, x4 slot. If you already buy this adapter, or have similar one, just put it in the slot and take off aluminum heat sink and put NVMe SSD disk in it.

How to know if my motherboard have right PCIe slot?

This is easy, just write down your motherboard name in google and in the sentence end type word – manual. For example, I have an old ASUS p7p55d-e LX, and in google search I type “ASUS p7p55d-e LX manual”.

After the short research, I find out that this particular motherboard have just one PCIe x16 slot which is needed for GPU. Another 2 slots, marked in red, are PCI slots which are not suitable for NVMe disk. But 4 PCIe x1 slots with right adapter are a good way to go.

PCIe NVMe SSD is superior storage for all kind of tasks, it is impressive fast and reliable type of memory. This kind of SSD uses PCIe lanes, which make it so incredibly fast. If you upgrade your PC system from SATA SSD or even HDD, you will be pleasured by NVMe SSD speed.

If you have more questions – feel free to write them in the comment section below, we will try to help you as soon as possible.