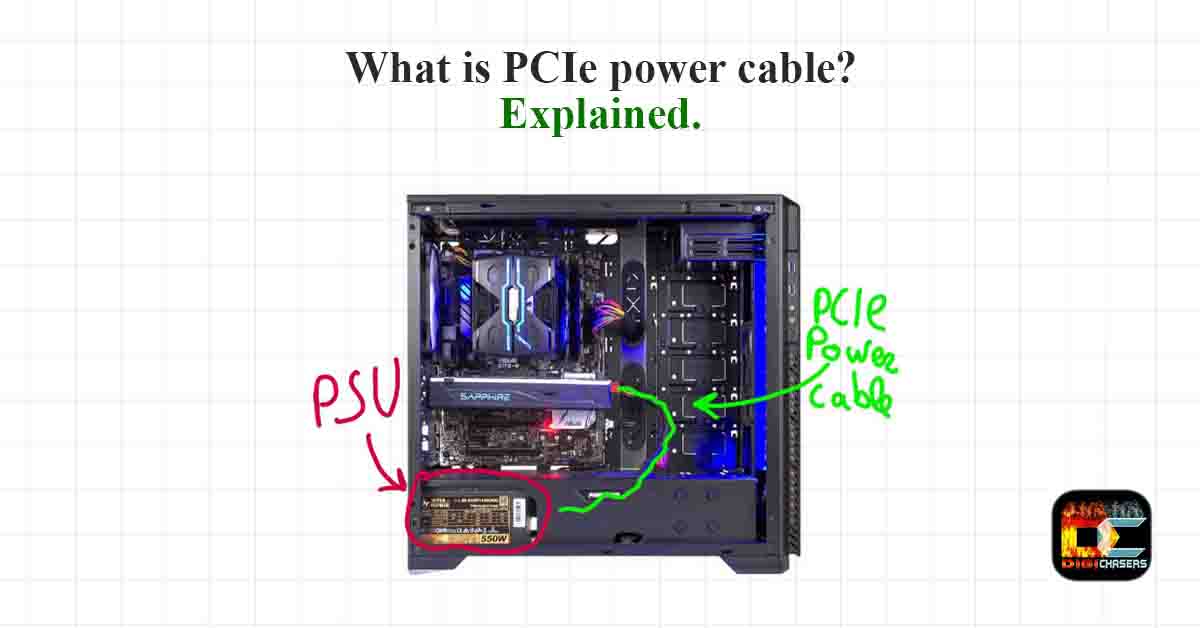 PCIe power cables are used to power a GPU (graphics processing unit) or other card requiring electrical power. Not all GPUs require PCIe power cables, but those that need one do not work without a PCIe cable. So what is PCIe power cable? How does it look? And what to do if you do not have one or the number of cables isn’t enough for your GPU.

Picture of the PCIe power cable going out from PSU (power supply unit) to GPU, which is connected to PCIe slot and requires a lot of power.

What is a 6 pin PCIe power cable?

75 W power will pass through the PCIe 6 pin power cable in the most common cause. Keep in mind that your PCIe x16 slot also has 75 watts.

What is a 8 pin PCIe power cable?

What are PCIe Cables used for?

It is used to power up GPU or other devices connected to the PCIe slot.

What to do if you do not have PCIe cable?

Older PC sometimes does not have PCIe cables. In this case, you can buy a Molex to PCIe power cable adapter. Most old computers have a lot of Molex connectors that can be made into PCIe power connectors.

Keep in mind that Molex connectors are rated for 54 watts. So if you connect 2 Molex to 1 PCIe power cable 6 pin, it will be safe enough. If you need an 8 pin PCIe power cable, you need to do calculations and check your GPU TDP and how many watts you need.

For example, the PCIe slot gives you 75 w, 8 pin PCIe power cable (made from Molex) will give you around 100 w, so you already have 175 w. If your GPU requires 200 w, do not risk using Molex adapters.

If you want to buy a Molex to PCIe adapter, you can buy it from Amazon here. Always remember that these kinds of adapters are a temporary solution.

How many PCIe Cables do I need?

Be careful when buying cables for PSU. In most cases, different cables from different brands are not interchangeable.

If you decide to buy, be sure to find the exact model of PSU and only then buy cables for it.

If you have more questions, please write them in the comment section below. We will try to answer them as soon as possible.