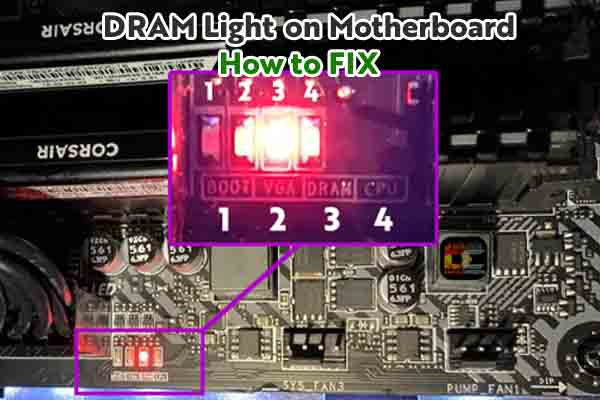 Your PC stopped working, or are you just now assembling your computer components? Today, we will figure out what the DRAM light on the motherboard means and how to fix it.

The DRAM light does not light up for no reason, so probably something wrong is happening.

Please be aware that this is entirely at your own risk. We take no responsibility if anything happens to your PC components during the procedures. We have succeeded, but it could happen otherwise.

In such failures, it is best to start with a simple thing. I mean things that don’t require much disassembly because sometimes the problem can be more straightforward than expected.

If the computer has been in use for a long time and no component change was made, you most likely have a bad RAM stick or connector on the motherboard. Also, there are cases when an issue where the power supply is not connected to the GPU causes RAM light problems.

The main problems of DRAM Light are CPU, motherboard and RAM. So we are suggesting starting with RAM and Motherboard.

If you have another RAM stick, you can try to change it. In this case, you will know if your RAM stick is working correctly. Next, examine the removed RAM stick, check the ram connectors for dirt, and check the motherboard plug. Maybe there is a lot of dust that needs to be removed.

If you have dual channel RAM sticks, try to change from A1, A2 to A1, B1. In this case, you will know if your connection on the motherboard is working correctly.

If you have 2 or 4 slots for RAM sticks, try removing all available RAM modules and use only one RAM stick.

If you are clearing the CMOS battery, that means you are resetting the BIOS settings to default. The CMOS battery is responsible for motherboard configuration, time etc. You can also check CMOS battery voltage if you have a voltage meter. It should be around 3 volts.

The Motherboard and compatible CPU

Bent CPU or Motherboard pins can be an expensive problem. It is also known that bending CPU pins can cause a variety of anomalies on the computer. For example, sometimes, the CPU cooler is fitted too tight. In this case, the CPU is pressed very hard against the motherboards PINS and bends them.

How do I check if your Heatsink bent CPU socket pins?

Even a slightly bent CPU or Motherboard PINS can cause a big problem. If you notice a slightly bent pin and have a magnifying glass and steady hands, you can try to fix it yourself. This is a complex procedure that requires a needle or plastic card.

Before trying to unbend a PIN, you can always consider an option – take it to a PC repair guy. Because a broken PIN almost always means that the component is dead.

Inspect the remaining PINS through the magnifying glass to see bent. By inspecting the PINS, you will know what angle they are bent and how they should stand. Such work requires time and diligence. Then, very carefully, try to unbend the pin into its original position without significant pressure.

Our tech guy Linus made a great video on how bent socket pins back to their place.

As you understand, the DRAM light on the motherboard can be caused by a variety of problems, but after checking all the problems we have listed, you will most likely find a solution. If you have not found a solution, or it was different – feel free to write in the comments, and then we will try to help you as soon as possible.

DRAM Light on and no display

You should first try plugging the GPU cable into the motherboard. Then, of course, if you have a CPU with an INTEL HD graphics interface, you will know if there is a problem with the GPU.

If it makes a beeping sound, that means your PC is trying to tell you something. If there is no BEEP sound, maybe your motherboard doesn’t have a speaker? All beep codes can be googled.

RAM sticks can cause a DRAM light on the MSI motherboard. There is a strange thing that something similar happens because of the RAM channel. Try to put RAM sticks into B1 and B2 instead of A2 and B2. In this case, your memory does not work in dual channel mode, but after a bios update, it should be repaired.

Asus wrote a great article about DRAM light which can be found here. If you did not find the answer and the answer are not in our article, write in the comments, and we will try to help you.

You probably have an ASUS Motherboard if you see a yellow DRAM light. Possible issues with DRAM lights on the ASUS motherboard have already been discussed. Still, a common problem is a heatsink that was screwed down too tight.

ASROCK branded motherboards have a flashing red light when the DRAM problem occurs. DRAM light signals that there is probably an issue with your RAM. We also want to note that everything is OK if the DRAM red light only appears when the PC is turning on. If the light stays, then you have a problem.