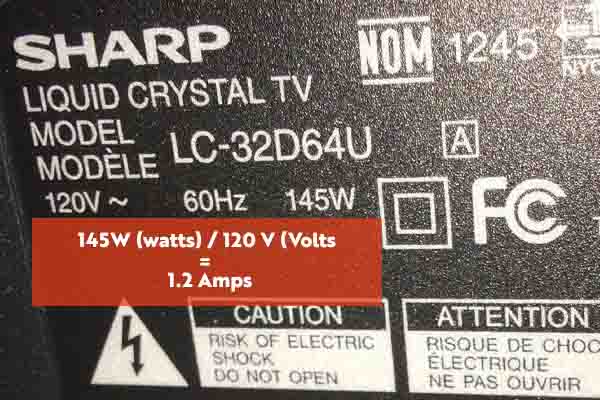 Nowadays we have a wide variety of electrical appliances in every home. When we get the energy bill it lists in the usage in kilowatt hours. But when you are buying electronic devices they have labels with watts, volts and amps.

Our generation TVs uses from 80 watts to 400 watts, which depends on the screen size, speaker power and other TV parameters. To count how many amps it uses is not hard to calculate, you just need to divide watts from volts and you get amps.

How many Watts does a TV use

To find that you need to check the back of the TV, information is usually written by where you plug in the cord.

In this case, if you want to buy a TV for your caravan or for another place, where AMPS calculating matters you can do it simply by dividing watts from Volts.

Note that you can have a slightly different amperage, but the voltage must always stay the same.

LED TV leads in electricity efficiency. Most electricity is needed for old type CRT TVs and Plasma TVs. So always choose a TV which has LED screen technology for places where electric power consumption matters.

Lots of acronyms, but what do they really mean?

What does Volts mean?

An electrical circuit uses electrons to carry the electricity, but those electrons need something to push them along a circuit. This Electrical pressure is what we call Voltage. It is often provided by two terminals, one with a positive charge and another with negative charge. On the battery electrons flow from the negative end through the device you’re trying to power on.

That’s why you can see labels on the battery with writings of 1.2v and 1.5v. Voltage just measures how strongly electricity is being pushed through a circuit.

If you’re plugging something into the wall, this voltage is provided by your power company.

Many circuits are designed only to accept a certain number of volts which is why the vacuum cleaner you buy in Italy might break and release smoke if you plug it in New York.

What do Amps measure?

Amps stands for Ampere, which is a unit of how much electrical charge is flowing past a given point in one second. When you put Volts and Amps together you can tell how much current is flowing and how hard it’s flowing.

What does Watts mean?

The watt is a derived unit for power in the metric system. It is used to describe the rate at which work is done on an object “how fast work is done“.

Let’s say you have an 750 Watts power supply unit (PSU) for your computer thats drawing full load. If you put it into a standard 110 Volt North American outlet, the simple math tells you that (750 watts/110=6.8) 6.8 amps of current is running through your power supply.

If you take the same power suply to the Europe, where the standard Volt is 220 you will have (750 watts/220=3.4) 3.4 amps of current running through your power supply.

If you have more questions feel free to ask them in the comments section. We hope that this article was helpful to you.