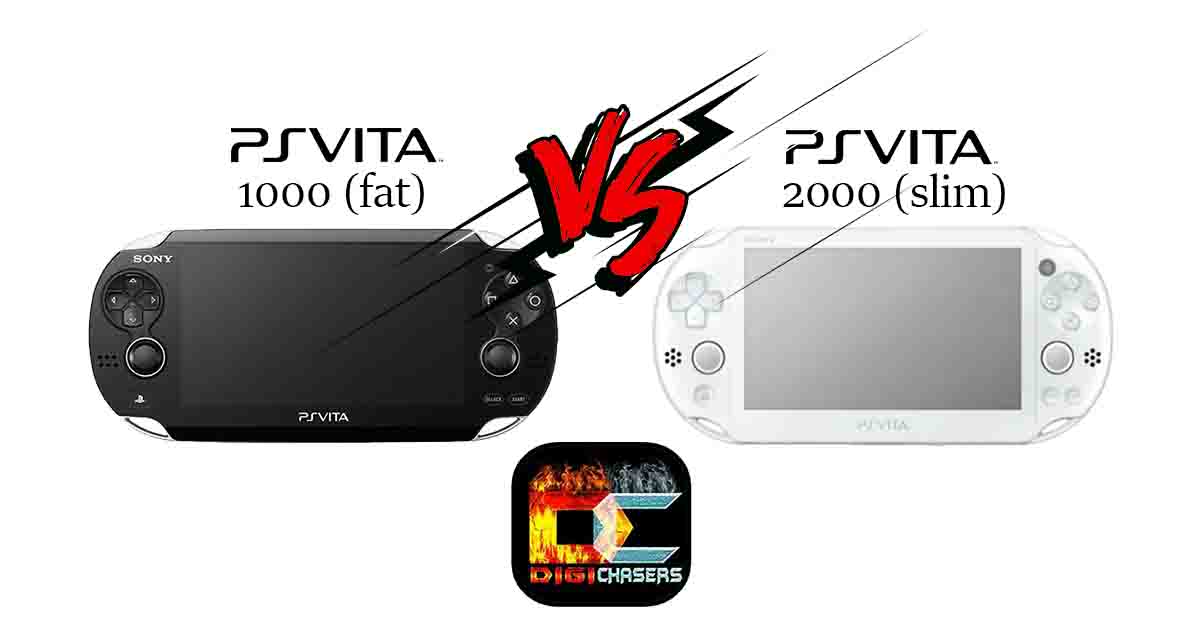 Hello, today we will decide the witch PS Vita model is now suitable for you. In 2022, the main portable console is the Nintendo Switch, but it’s still quite expensive, so it’s worth remembering some of the already forgotten consoles – PS Vita. With PS Vita, you can play really good modern graphic games.

The PS Vita was released in 2012 as a model PS Vita 1000, otherwise known as Fat, and after 2 years, in 2014, Sony released an upgraded version of the PS VITA 2000, another called Slim which had both good and bad upgrades.

Okay, let’s try deep dive into this question and try to help you decide which version of PS VITA 1000 or PS VITA 2000 is a better option for you?

We will not consider the main hardware components in the device comparison, as both versions have identical GPU (Quad-core PowerVR SGX543MP4 +), CPU (Quad-core ARM Cortex-A9 MPCore), RAM (512MB), etc.

The 2000 version called Slim became a much more tin device. It now has a Micro USB charging port, and now it has 1 GB of internal storage, so for jailbreaking this device, there is no need for a micro SD card.

The PS Vita 1000 front glossy plastic collects quite a few fingerprints that can become annoying. And in the PS Vita 2000 version, there is also the possibility to purchase matte plastic versions, on which no stamps or fingerprints will remain.

So, in my opinion, the PS Vita 2000 is much more practical, and you no longer feel that you should always have a wipe for fingerprints with you.

The PS Vita 1000, although older, has a much better OLED screen than the PS Vita 2000 LCD. An OLED screen displays colours much better than an LCD but uses more power. However, the LCD screen looks better for some because it achieves slightly distorted colours and displays them in slightly warmer colours.

Below is a tutorial on installing a micro SD card in the PS Vita.

Production of these devices has already been stopped, so a new device is unlikely to be available for purchase. Therefore, we will look at prices in the second-hand market.

And in terms of points counting, the ultimate winner is the PS Vita 2000.

Story: “Mercenary follows the story of Arran Danner, a mercenary hired by the ISA. Mercenary was met with positive critical reception for its quality as a portable-console first person shooter.”

Story: “The story follows Rayman, his friend Globox and two teensies as they fight Darktoons and other evil creatures that have infected the Glade of Dreams.”

Story: “The player controls a spelunker who explores a series of caves while collecting treasure, saving damsels, fighting enemies, and dodging traps.“

Story: “Lieutenant Kai Tana is as sharp and deadly as her name implies. Flung across the universe through a singularity, she and her advanced spaceship must take on an evil alien empire, rescue prisoners, and pick up crystals to help power up her assault against the bad guys. “

Story: “A coming of age story that sets the protagonist and his friends on a journey kickstarted by a chain of serial murders.“

Both versions are fully backwards compatible and will play PlayStation Portable and PlayStation One games.

While the PS Vita 1000 on the hands looks like a more premium device, the little things like fingerprints and higher weight make it look more fragile. In my opinion, 2000 is more suitable for travellers, due to the better battery life and the micro USB charging connector.

Both consoles have pros and cons, but I would choose the PS Vita 2000 versus the 1000 version. But if you found the PS Vita 1000 for a good price, I would buy it because the result of both versions of the gaming experience is almost the same.